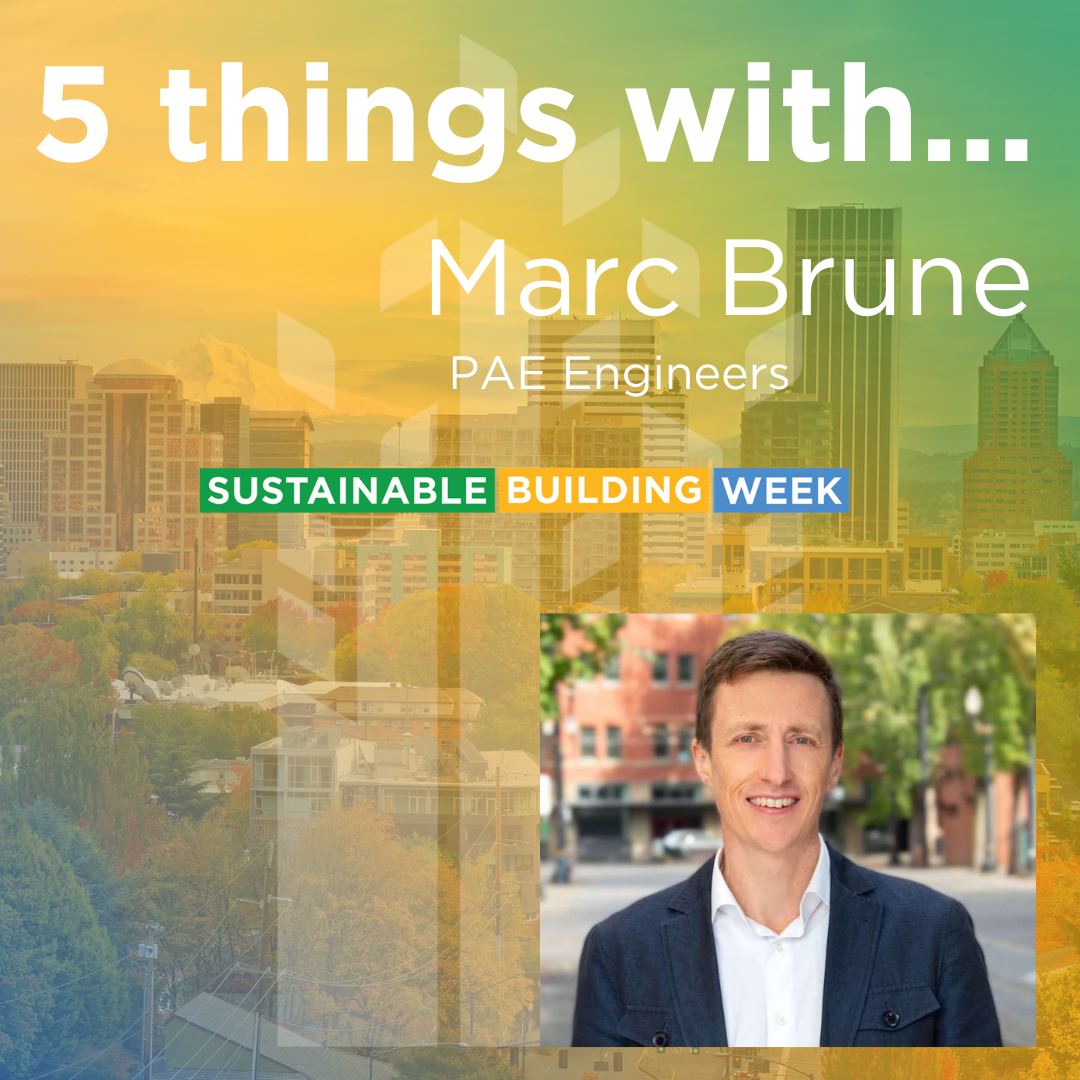 We’re celebrating five years of Sustainable Building Week and to help mark the occasion we’re launching Five Things: a series of interviews that connects our five years to you, Portland’s sustainability community.

There’s a good chance you’ve heard of or know many of the building’s tenants such as New Buildings Institute (NBI), Earth Advantage, and of course its anchor tenant, PAE Engineers.

There’s an even better chance that you know or know of PAE’s Marc Brune. Here are some thoughts he shared with us covering everything from being sustainable to which local projects are inspiring him.

Tell us about your role at PAE.
I’m involved in a lot of our highly sustainable projects and I love that. It gives me a lot of energy to work on those. And as a principal, I’m helping envision where the projects are going to go, then making sure we’re meeting our quality expectations and everything is moving along smoothly from there on out while keeping the vision on sustainability. I’ve always thought about trying to lead by example, and we’re trying to create some of the world’s most sustainable and energy-efficient and water-efficient buildings, and we hope we can show others the way.

What have you learned from previous sessions at Sustainable Building Week?
I actually presented at the first one, which was an overview of the PAE Living Building. Now, we host each month.

What has been really valuable has been the awareness of the cool things that are going on in our collective design community. The one that stands out to me was Mark Fretz’ (University of Oregon) presentation about 3-D printing and upgrading facades for buildings that improve the thermal performance but also provide a seismic upgrade at the same time. He created a mock-up, a two-story 3-D print, based on a Lidar scan of the outside of the building. The printout of the new facade looked better visually, with a seismic and thermal upgrade of the building. It was really inspiring and super cool to learn about the work he was doing.

What does “sustainable” mean to you?
I’ve latched on to the concept of regenerative design and the Living Building philosophy of what “good” looks like—how to start to change the way we build things and the way we live our lives in a way that isn’t consumptive, and not harming the planet and the ecosystems we all depend on.

The other concept I’ve thought about lately is the idea of being a good ancestor and how the decisions we’re making today are going to be impactful in the years to come. At the PAE Living Building, we have an art installation in the lobby. Part of it is a CNC-milled basketweave pattern from the Wasco tribe that represents faces of Native American ancestors. It’s a land acknowledgment about the tribes that have been here so much longer than the (primarily) European community that’s here now. Being a good ancestor is something we all need to take seriously. That’s sustainability for me.

What inroads has Portland made and what still needs to be done to “keep Portland green?”
Portland has a large existing building stock. And I know how hard it is to upgrade those in a way that really improves their efficiency. I would focus on the decarbonization of that existing building stock, which probably means working hard on electrification of those buildings. On the transportation side, I think we’re doing pretty good and I feel pretty good about the electric vehicles that are coming down the line. But the building stock is just something that we’re going to have to really work on.

I think there’s a movement toward heat pumps for low-income housing that’s going to help get air conditioning into homes for our hot summers that will provide equity and safety in those low-income communities but also provide energy efficiency at the same time. I think that’s going to be really powerful as a double benefit.

Name a local project or collaboration that has inspired you and tell us why you are inspired by it.
Hopefully it’s not too self-serving, but to me, it’s the PAE Living Building. The fact that the team was able to do that as a developer-led project and create a building that’s, I would say, regenerative or getting close to regenerative, and do it under a typical developer model is something that can show others that it’s possible.